Trying to grow an audience for a B2B SaaS is difficult. Not only have I been told this by the internet, I have begun to confirm it by trying to do it for a couple of months.

Servd's audience growth strategy for Feb 2020 was to create high ranking content which would drive traffic via organic search. The ultimate aim will be to get Servd in the top spot for the search term 'Craft CMS hosting', but that will take a lot longer than month, and a lot more backlinks than I'm likely to obtain with the limited amount of good content that I can produce over the course of a month. So I settled on trying to get Servd onto the front page of Google's search results.

My traditional understanding was that this would mean getting Servd into the top 10 search results a specific query, but it turns out the landscape has changed a lot over the last year or so. Google will now show anywhere between 5 and 10 real results on its first page , with a big ole' mash up of Ads, knowledge graph content and quick results merged in.

The difference in position between different countries was also a lot more variable than I originally anticipated. By the end of February, servd.host was ranking at position 6 in some countries for broad Craft CMS search terms, but at around position 20 in others. Further research is required to figure out what causes that so that I'm able to target key geographic demographics in the future.

My focus was on writing good, long-form content with a decent keyword ratio that was also likely to be shared on social media and generate backlinks from established Craft CMS content silos (such as craftlinklist.com).

The first three articles were medium-length explorations of specific problems encountered by Craft developers on a regular basis, along with appropriate solutions.

The latter two are long-form posts which offer a collection of tips, tricks or evaluations.

I'll start with social media as it was somewhat of a secondary goal and I didn't have any specific targets for engagement, but it's still interesting to see how the articles performed. 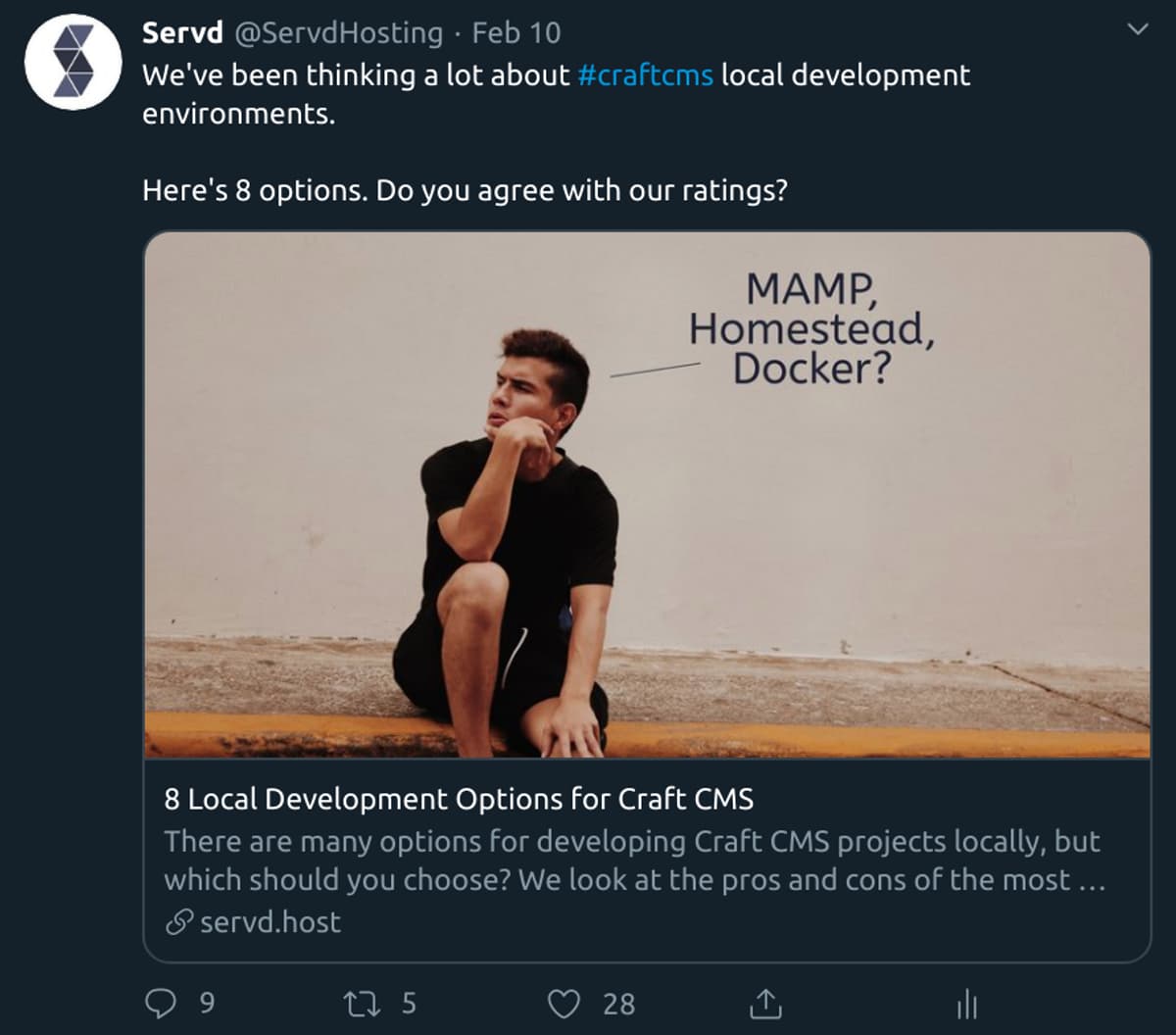 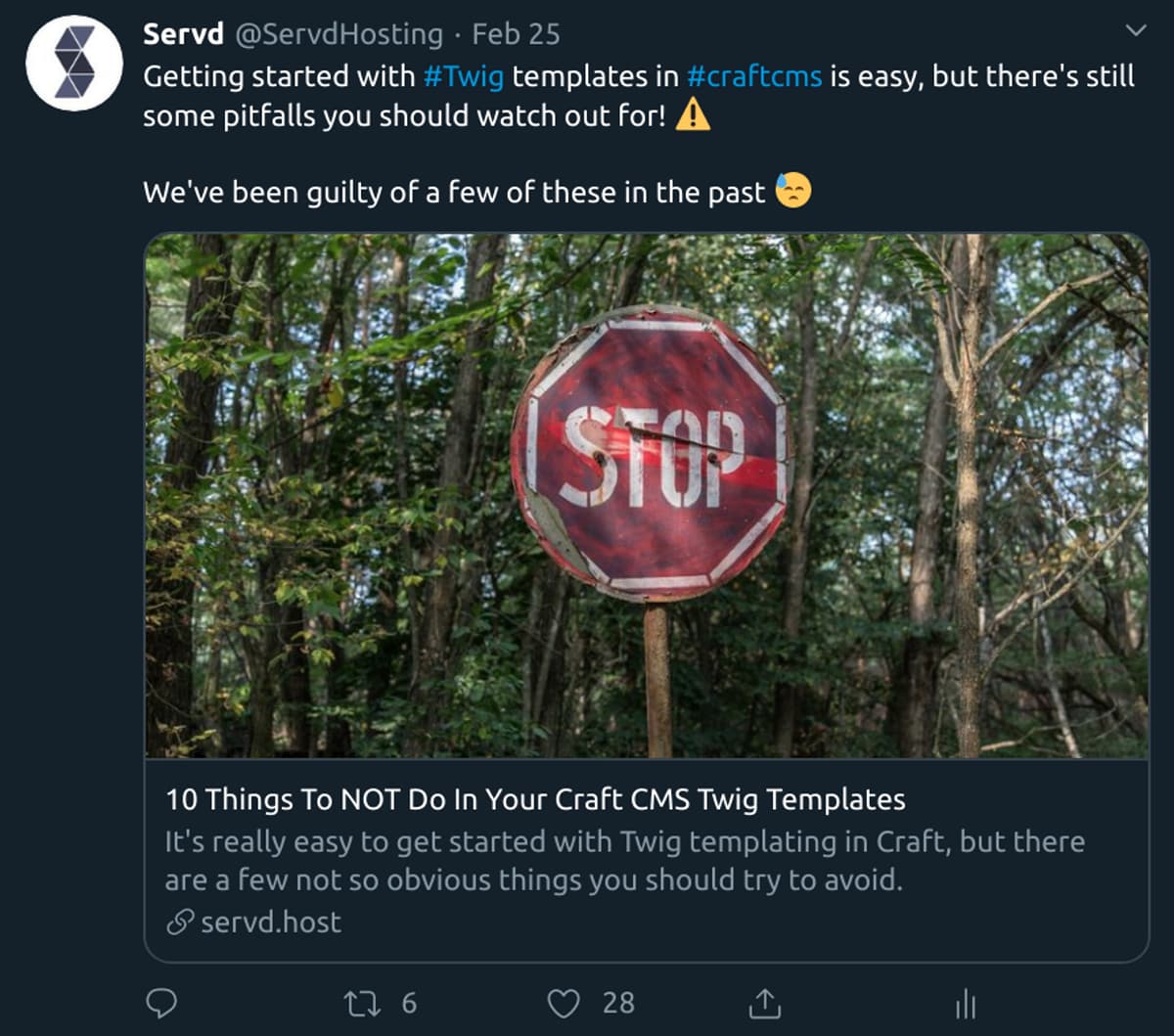 I still have two of the articles in reserve to be published when I'm in-between other soc-med posts and want something to share.

The vast majority of impressions and clicks came from the Local Development article because it was the only one of the three which was retweeted by @CraftCMS. That always generates a lot of traffic.

Lesson learned: Get retweeted by the official Craft CMS twitter account. 😆 If that can't be guaranteed it seems as though multi-point, long-form content gets the greatest reach on social media. Maybe because a larger audience can find at least one thing in there that they feel is worth sharing.

Before creating this content Google had servd.host ranked pretty low for generic Craft CMS hosting queries. Here's the graph for the search term 'Craft CMS Hosting' for the majority of January 2020 for all countries:

The site is sitting at around the 20th position and has about 7 impressions per day. Pretty poor.

If we extend the time range out to cover some of February we can clearly see the time that the first 3 articles were published:

These first three articles pushed the average position up to 11 almost immediately. This then fluctuated between 10 and 12 for a while whilst making very little difference to the total number of impressions per day. That's to be expected as very few people actually visit the second and third pages of Google search results so we'll only expect a significant up-tick in impressions once we break onto the front page for this search term.

Publishing the fourth and fifth articles has made basically zero short-term difference to these results. For the search term 'Craft CMS Hosting', servd.host currently fluctuates between position 9 and 11 with around 10 impressions per day.

However, that's not to say this content has been useless. If we take a wider view and look at overall search impressions, not filtered by the specific Craft hosting query, we can see a different story:

Here the first three articles were published around the centre of the graph and the final two towards the end - there's a clear uptick in impressions for both events. It seems as though each article is making a significant positive impact on impressions due to long-tail search terms.

There are lots of other semi-interesting graphs that can be generated, filtering for specific pages or countries, but any takeaways would be pure speculation. I might revisit again in the future once a bit more data has been collected.

Lesson learned: breaking into the top 10 search results for 'Craft CMS hosting' is a lot more difficult than moving up to around position 10. I expect the catalyst for the final push onto the first page of search results will be via backlinks from reputable sources of Craft CMS info or wider technical blogs. PR maybe required, not my forte.

Along with general maintenance, feature development and onboarding new users I want to tackle a big issue related to user education. Currently users are making their way through the initial project setup phase but then abandoning the platform before testing out any of the functionality which is designed to make their lives easier. It would be nice if they knew that that functionality existed - it might help to demonstrate why the platform is a net benefit for them.

With this in mind I'm going to put a particular focus on email-based education. Specifically I'll be setting up a drip email feed for newly registered users which explains some of the platform's benefits. Hopefully this will provide a few triggers to help users finish off their initial investigations into the platform and also explain some of the functionality that they might have otherwise missed.

Read Next
Build it, and They will come (Servd, January 2020)
#servd #entrepreneurship #craft-cms
2023 Goals
Write Things