It turns out that consolidating my thoughts into words RE the primary project in my life is not something that comes naturally to me.

I am therefore catching up on four months of missed progress reports on Servd.

It feels as though a lot should have happened in that time frame, and indeed, the MRR of Servd has increased by 200%. But every step along that path has been so small as to feel inconsequential and not worth sharing.

I guess that's where the 'overnight success' fallacy originates. If the Zucker-bot had let us know every time a new user registered on Facebook we'd have blocked him a long time ago, but he waited until he had a billion users so that we'd be impressed. Master of the long-game.

I think I might just have talked myself out of writing these Servd progress posts...

Many of the features I had planned on implementing are now implemented and have been tested significantly in production. All were well received. Nothing exploded.

The Servd dashboard has gone through another couple of rounds of reorganisation/redesign. It now seems to work well in all of its utilitarian glory. Even the primary font is called 'Assistant'. It is truly a dashboard which helps its users achieve their end goals and nothing more. 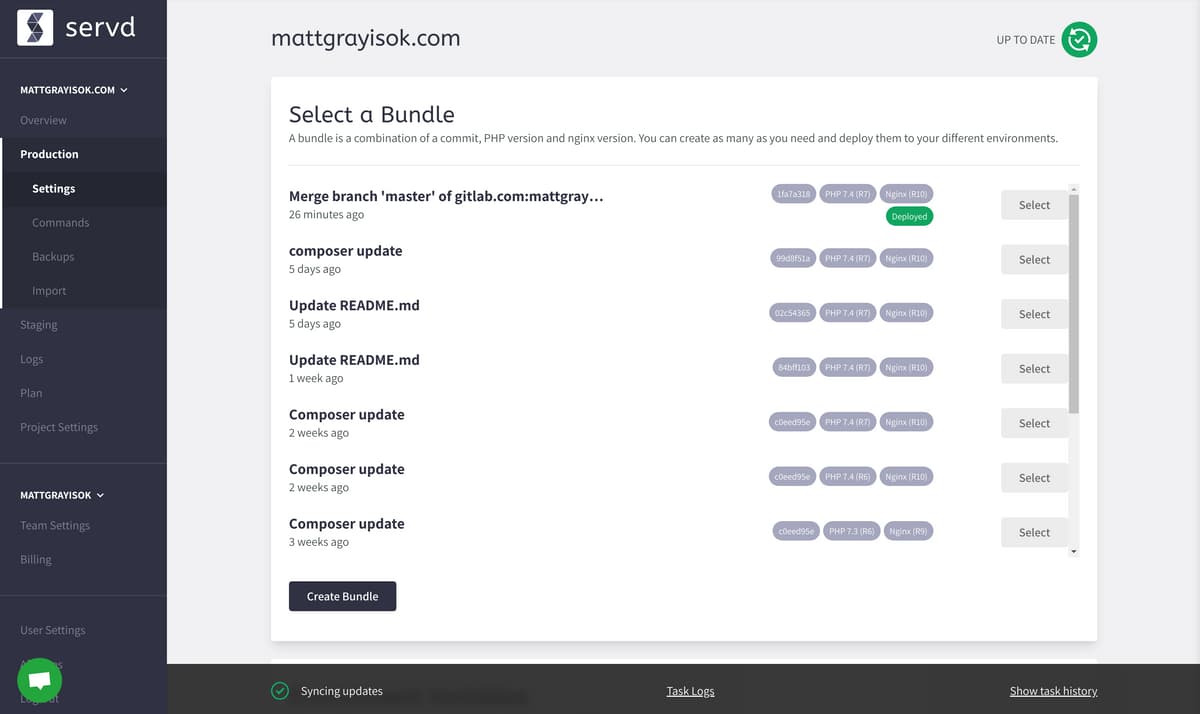 I've spoken to a lot of people via email and live chat. I think this has been my favourite part of the process of building Servd. Figuring out what people mean, what their motivations are and how best to communicate with them in order to try to find a path forward which maximises success for us both.

Not all conversations have ended with the outcome I'd have hoped for, but each is an opportunity to forge new connections and find common ground, irrespective of outcome. Something I find traditional sales conversations lack.

On a more technical note, a couple of cool new features have been in the works.

You can now build your static assets (CSS/JS etc) as part of the Servd bundling process. This means you no longer need Buddy/Deploybot/GitLab CI etc as part of your deployment workflow. Servd can take your raw files and compile them as part of its standard bundling builds.

It's not foolproof and has a few prerequisites, but it works for 90% of Craft projects, and that's some pretty good market coverage. It brings Servd a step closer to being a one-stop-shop for Craft project DevOps and hosting.

This was a fun one. Servd will very soon support arbitrary horizontal scaling of database nodes in a single-write, multi-read topography. This will all be automated and will be able to be scaled up and down arbitrarily. It will require zero config for project developers - Servd literally handles everything.

This is not only great for extensibility of projects, but also for availability. Servd already had automated crash-recovery for project databases, but now if any individual database instance fails there should be zero downtime of database reads. So end users might not even notice anything went wrong. Database writes will still fail for a short period is the master DB falls over, but that will still self-heal as it always has.

August is likely to be a big month for Servd. If all goes to plan we'll be seeing the first large-scale enterprise client joining which will be a significant boon on both the marketing and MRR fronts. In preparation for this I've been bolstering Servd's ability to handle out-of-hours and fast-response support requests. More on that as it solidifies.

From a tech POV the database scaling things should be going live but likely nothing else major. Maybe a few updates to the Servd helper plugin.

RE Marketing I'm hoping to put together a few pages on the main Servd site which highlight the benefits of Servd for particular user groups (agencies, startups, enterprise etc). These should help to more clearly explain some of the key benefits of the product itself.

See you in another 4 months (probably).